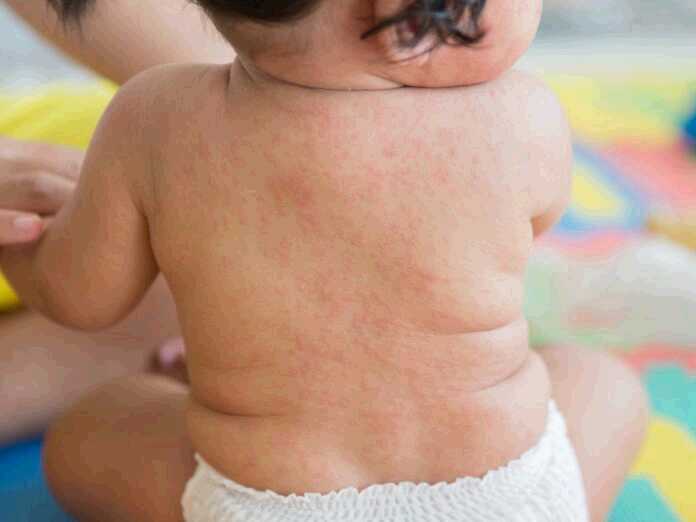 Roseola is a mild infection that affects children by the age of 2 and sometimes infects adults. Most children are infected with roseola by the time they go into kindergarten. It is very common. Here are the causes, symptoms, and treatment for roseola.

Roseola is caused by one of two common strains of the herpes virus, human herpes virus 6 and 7. It spreads from person to person in the same way as the common cold. That is, through contact with an infected person’s saliva or other respiratory secretions.

This condition can spread even if there is no rash present. So, if an infected child only has a fever, they are still contagious.

Signs and symptoms can take a week or two to show after exposure. Sometimes symptoms are so mild you may not notice them. The two primary symptoms are fever and rash.

The fever appears suddenly and is very high. Your child may also develop a sore throat, cough, and runny nose with the fever, or right before. Lymph nodes may also become swollen. The fever lasts less than a week.

A rash usually appears after the fever goes away, which contains patches or small pink spots. The spots may be raised, but generally are flat. Sometimes there are white rings around the spots. The rash manifests on the torso. Starting on the abdomen, back, and chest it then spreads to the arms and neck. Sometimes it reaches the face and legs. The rash itself is not itchy or uncomfortable like chicken pox. And, it can fade after several days or several hours.

Since most children recover from roseola on their own, there is no specific treatment for it. If your doctor recommends it, you can use over-the-counter medications to reduce fever.

Also, some doctors may prescribe an antiviral medication. It’s used for people who have weakened immunity to treat infection. But, antibiotics have no effect in treating viral illnesses, like roseola.

Roseola is generally a mild illness. But, knowing the causes, symptoms, and treatment for roseola would go a long way to easing your worry in case your child ever contracts it.